The depopulated township at Suidhe on the Ross of Mull

The depopulated township at Suidhe became a scheduled ancient monument in January 2004. The name "Suidhe" comes from the Gaelic word meaning "Seat"; tradition has it that Saint Columba rested there, and the area was a resting place for horses on the road to Iona.

The first known documented reference to the settlement at Suidhe can be found in Blaeu's map, dated 1654, where it is named as "Suy". The settlement can be seen on the extract from the map shown below, just to the left of Loch Lye (now known as Loch Assapol) that is bisected by the central crease, about 1/3 from the bottom. 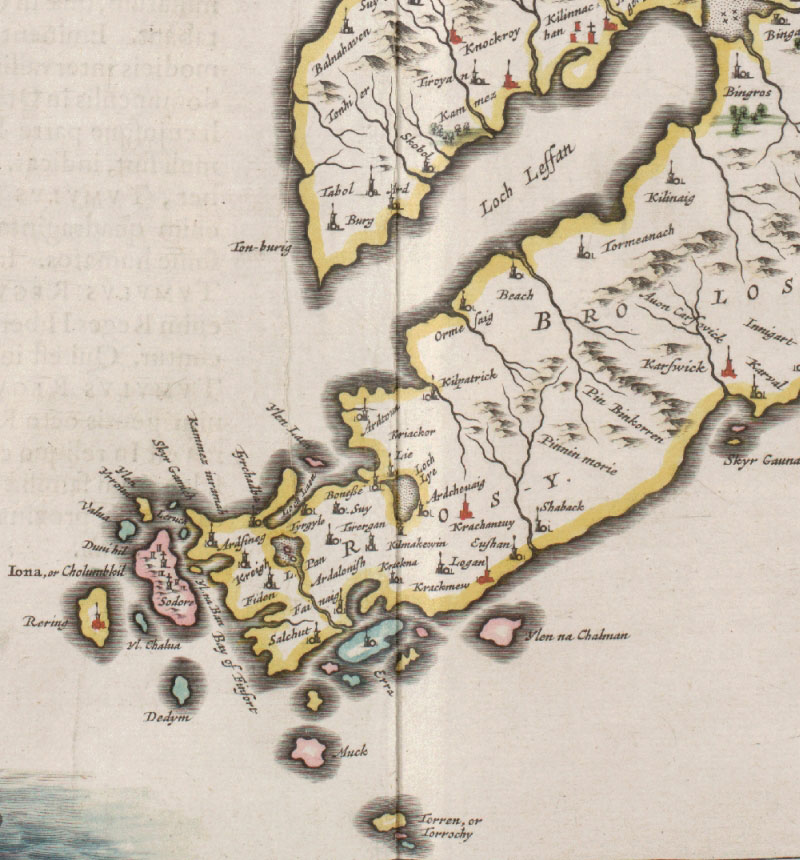 In the 1779 census, Suidhe is listed as having a population of 56 (not counting female children, who were excluded from the census). The last occupants left the township in the 1920's to 1940's, due to increasing rent charges by the Duke of Argyll.

The settlement is shown very clearly, in a form that is recognizable from the ruins that can be seen today, in a 19th century Admiralty chart, an extract from which is shown below. Here, it is labelled as "Suidhe F" - presumably a truncation of Suidhe Farm. The chart shows a track leading up to the settlement, passing a single house close to the main Bunessan-Fionnphort road; the first part of the track, leading to the ruins of the isolated house, still exists, but the rest of the track up to Suidhe is now overgrown and no longer visible. 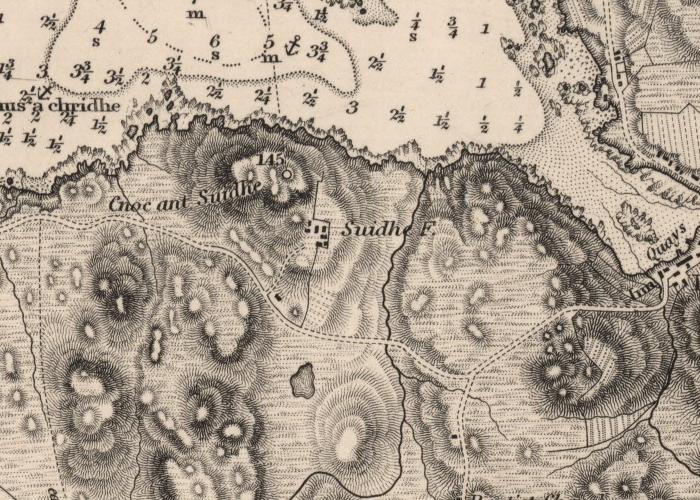 Although these maps represent the earliest documentary evidence of settlement at Suidhe, it is highly likely that this site was inhabited thousands of years before records began. During the initial site clearance for the building of the Suidhe Farm Cottages holiday cottage development to the South of the Suidhe settlement, two charcoal pits and a flint knife were uncovered; charcoal from the pits was sent for carbon dating and revealed that the timber had been cut approximately 4500 years BC.

Suidhe is the point on the Ross of Mull where the geology transitions from the Basalt that is typical of the majority of the island to Granite. Suidhe itself has a large seam of Schist through it with seams of Quartz, which can easily be seen. If you are interested in more detailed information on the geology and soil types on the Ross of Mull, follow this link where you will find a report on the Tireregan landscape regeneration project that includes a simplified geological map of the Ross.

The following text is reproduced from the "Statement of National Importance" that was developed as part of the proposal to schedule the monument.

The monument comprises a depopulated township of medieval and later date, visible as upstanding remains. It is situated on the Ross of Mull, about 1200m WNW of Bunessan and 350m S of the southern shore of Loch na Lathaich, at OS map reference NM371219, and at about 50m OD. The settlement site, which slopes downwards slightly towards the loch, has extensive views over the loch and surrounding countryside.

A survey in 1991 confirmed that the pre-crofting township includes houses of drystones and of mortared construction. Several structures showed evidence of more than one period of use, such as blocked doors and windows. This impression is reinforced by the differential preservation of the structures, some surviving to gable height, and others much more reduced. Several houses also showed evidence of either a lean-to outbuilding or of an earlier structure at one gable end. Other structures have round gables and one had rounded lower courses corbelled out to a square from about 1m above foundation level. The different character of the buildings results from the different functions that they served; one building in particular seems to represent a more prestigious dwelling. Field banks, built of stone-and-turf or turf alone, denoting agricultural divisions and also probably indicating more than one period of construction, were traced radiating away from the settlement. A stack field with boundary wall still in place is located immediately S of the settlement.

The area proposed for scheduling comprises the remains described and an area around them within which related material is likely to survive. It is an irregular polygon in shape, with maximum dimensions of 101m N-S by 104m E-W (115m WSW-ENE), as marked in red on the accompanying map (see below).

The monument is of national importance because of its potential to contribute to an understanding of post-medieval, and possibly medieval, settlement and economy. Its importance is increased by the cartographic and survey evidence that this site was occupied and adapted over a period of at least several hundred years. 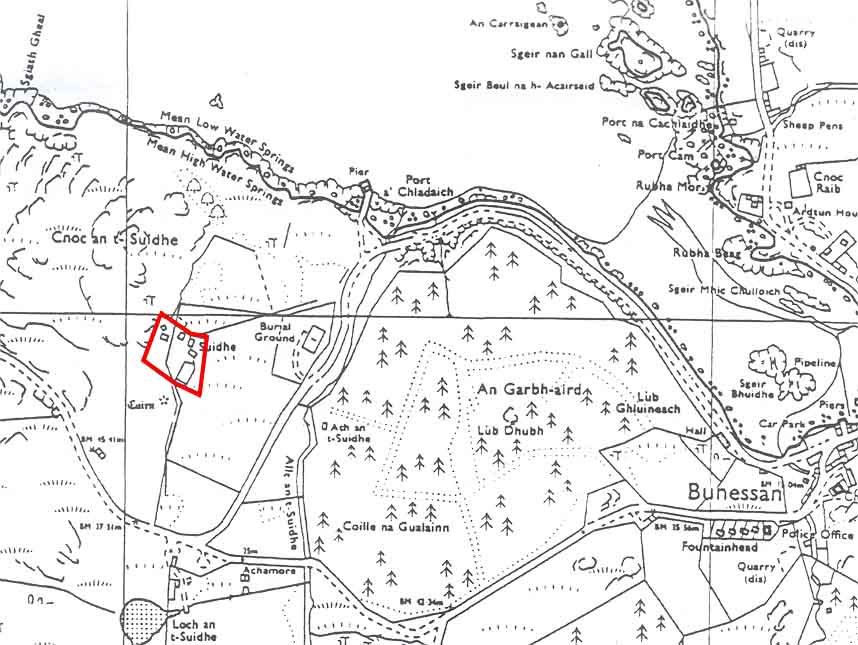 The township at Suidhe is a scheduled ancient monument . It's designation means that it is protected under the Ancient Monuments and Archaeological Areas Act 1979. The prior consent of the Scottish Ministers (scheduled monument consent) is required for any works which will lead to damage, demolition or destruction of the monument, any works of repair, removal or alteration and addition, and any flooding or tipping. Scheduling means that it is an offence for any visitors to the scheduled site to damage or disturb the designated area in any way. The use of metal detectors on the site is not permitted without written consent from the Scottish Ministers. Scheduling does not prevent continued agricultural land use on the site, such as hay cropping or grazing.

Scheduling does not mean that the monument will be actively conserved. Conservation is the responsibility of the landowner, although there is no mechanism under the Act to require owners to carry out any active conservation or restoration works - the emphasis is on taking steps to prevent further degradation of the monument that might be caused, for example, by human intervention, or by tree growth within the site. Indeed, it seems that Historic Scotland will discourage active restoration work unless there is clearly documented evidence as to what the original state of the monument actually was, and, as can be seen with this township, that "original state" has clearly changed over time as the uses and building techniques employed have evolved. For example, how would one determine what was the appropriate way to restore a building such as the one on this site that has evolved from round corners to square corners as a result of more recent reconstruction? To remove the recent square-cornered structure from the older foundations and restore the "original" round cornered one would destroy an interesting and valuable piece of history that shows how such structures evolved over time. Yet, it could be argued that restoring the newer structure to its most recent, probably corrugated iron roofed, state would be inappropriate, as it might further obscure the nature of the original structure. One of the major problems is, of course, that as our ancestors did not have access to modern means of archiving information, it may never be possible to determine what "original state" means anyway. Without accurate, authenticated information to guide the work, any attempted "restoration" based on some kind of guess (educated or otherwise) as to the likely original structure would rightly be regarded as vandalism. For these reasons, it is highly unlikely that the ruins at Suidhe will ever be restored to their original state.

Aerial map courtesy of Bing Maps, photographed circa 2008, shows the site of the township. Click the "view larger map" link and you can zoom/pan to see the surrounding area.

From across the bay in Ardtun, the ruins of the township are clearly visible on the skyline, as seen in the photo above. 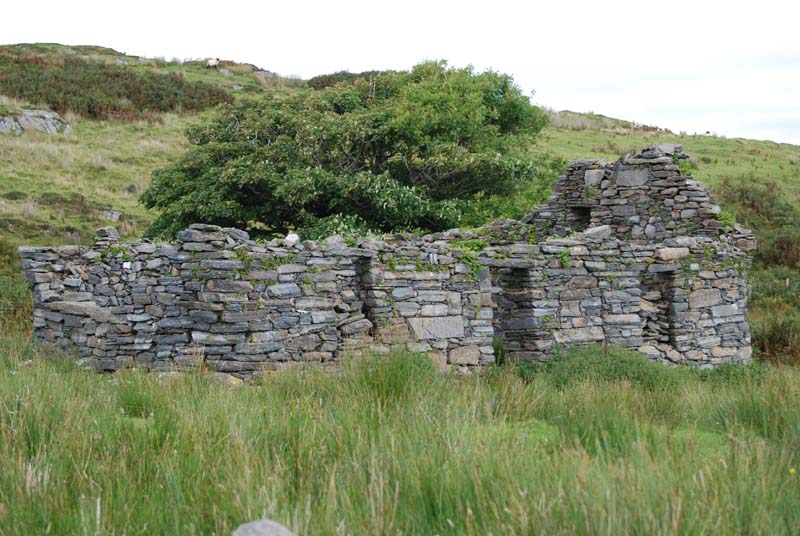 The photos above and below show the most modern of the buildings; this is the one described above as having "... rounded lower courses corbelled out to a square from about 1m above foundation level." The construction of this later structure is mortared, in contrast to some of the earlier structures that are of dry stone construction. The change from round corners to square corners in this building probably marks the change of roofing materials from thatch to corrugated iron. The interior view below shows the fireplace and chimney breast largely intact. 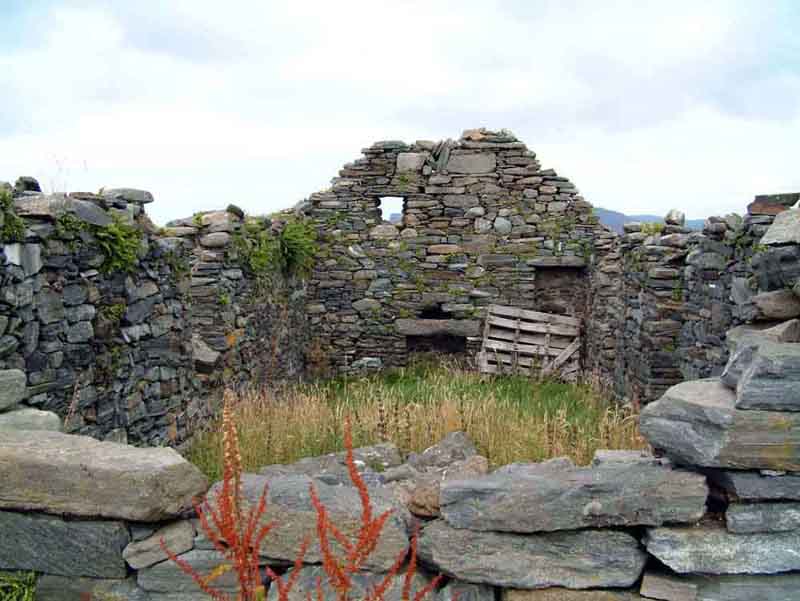 The next pictures show a corner of this same building, and also give an idea of the stunning views to be had from the site out over the loch to the hills of the Burg peninsula beyond. From the top of the hill, you can see most of the Ross of Mull, Erraid, Iona, Ardfenaig, Staffa, the Burg peninsula, Ben More, Loch Scridan, Lee Hill, Carsaig Cliffs, Tor a Bhacain, Ardlanish, Jura, Colonsay, Islay, and Bendoran Bay. 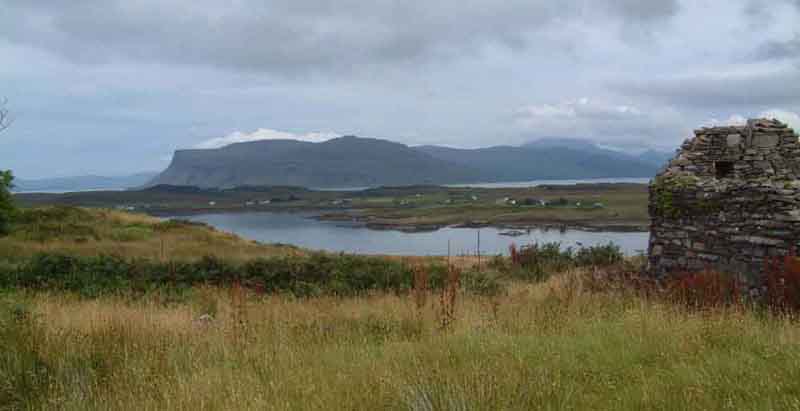 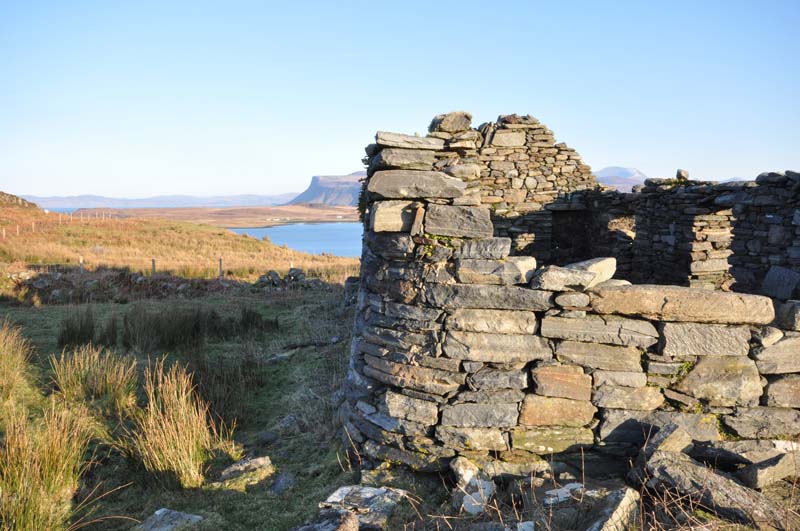 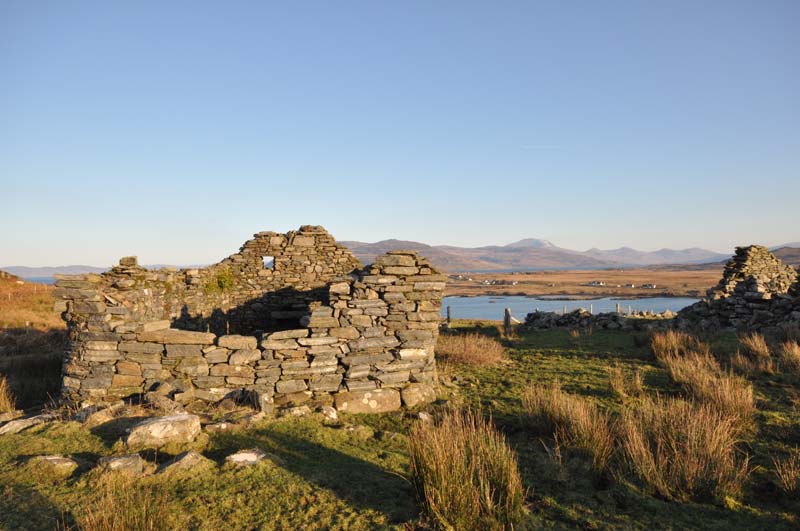 Looking to the East, a second building of earlier construction can be seen, as shown in the next two photographs.

Just visible peeping out over the wall in the photo below is one wheel and tyre of an almost complete lorry chassis that has been dumped within this part of the ruins. As the chassis is clearly too large to fit through any of the openings in the walls, it must have been lifted in using a crane of some description!

The following photograph, taken from the top of the hill named Cnoc an t-Suidhe, shows the whole of the settlement as it can be seen today. On the far right can be seen the rectangular boundary wall of the "stack field" mentioned in the scheduling report. 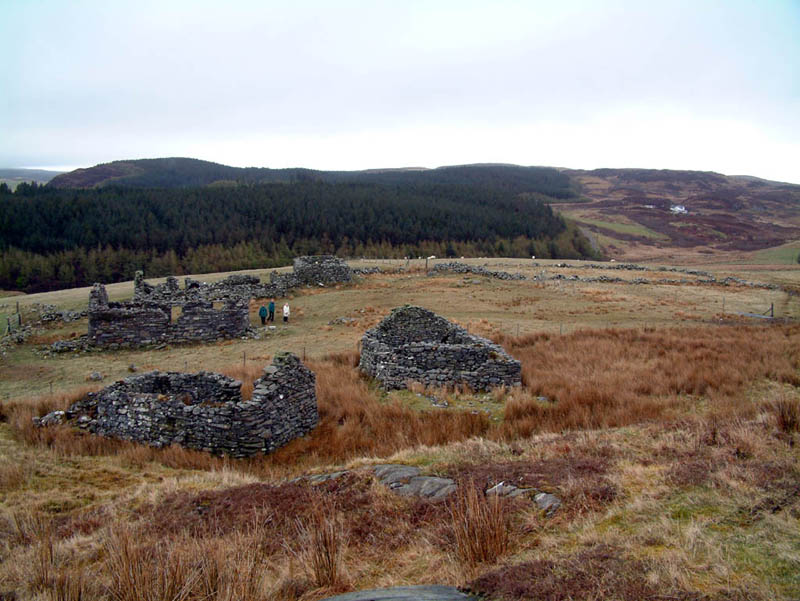 Also close by the site, to the Southwest, is a prehistoric Barrow, some 7,000 years old, with two standing stones clearly visible on its NNE side. The barrow, now covered in grass, measures 22m by 19m and stands to a height of 1m, with a slightly hollowed centre. The following photographs show the standing stones as they can be seen today, firstly from the bottom of the hill to the South, and secondly close to. The barrow and the standing stones are also the subject of a (separate) scheduling order, and are therefore also a scheduled ancient monument. 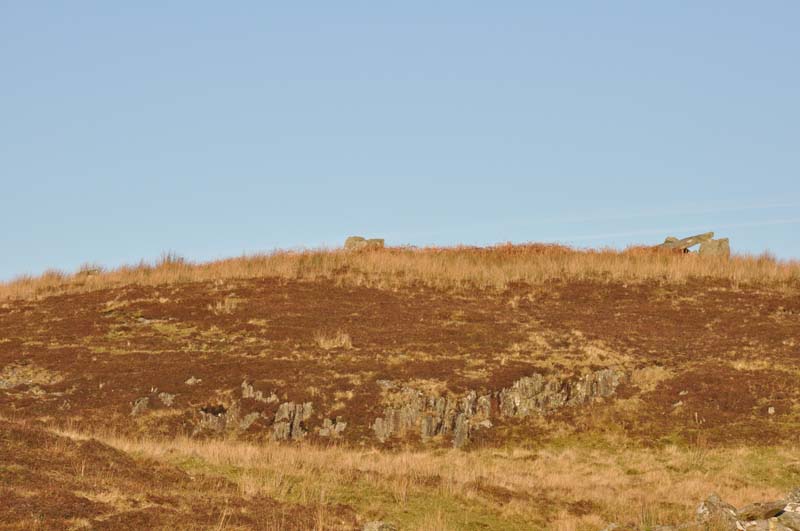 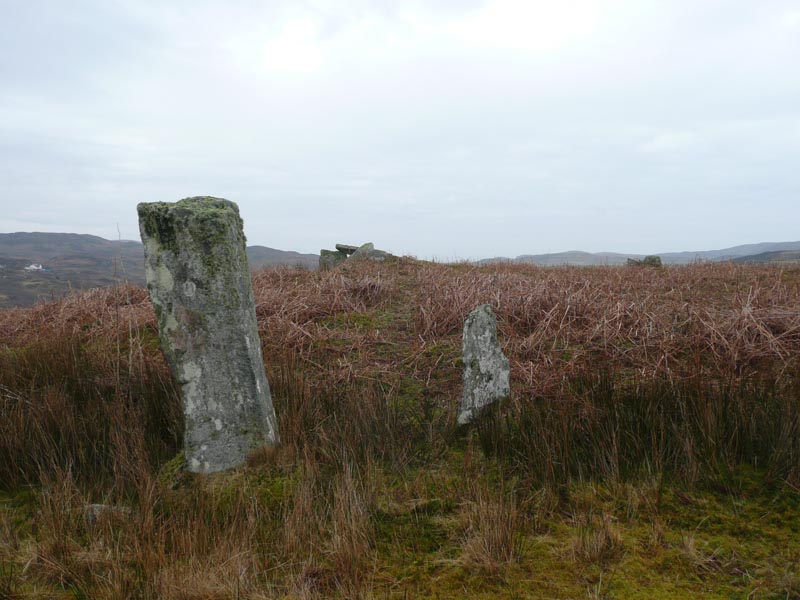 Current and historical weather information for Suidhe can be viewed here.

Some of the information on this page was kindly provided by the Ross of Mull Historical Centre.

The Historic Scotland website gives further information on their activities and other sites of interest in Scotland.

The management plan for the Tireragan landscape renewal project makes a fascinating read in its own right, but of particular interest to Suidhe, it includes maps of the Ross of Mull showing geology and soil types.

From 2011 you will be able to stay in self-catering cottages within sight of the stone circle, and within a very short stroll of the ruins.

Please send any comments on this site to suidhe@jeffree.co.uk